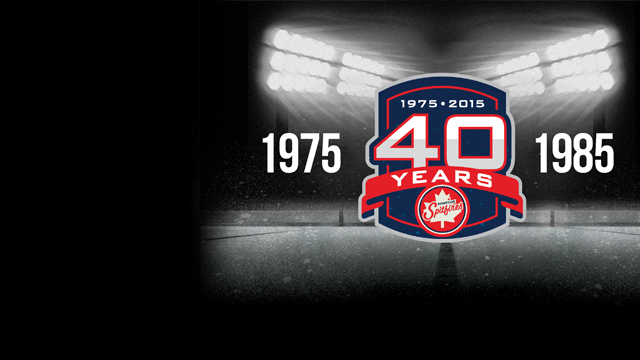 Join us this Thursday night, October 30th, as we kick off formal celebration of our 40th Anniversary with the first of seven theme nights; this one honouring the franchise’s first decade, 1975-85.

Three distinguished Spitfires alumni will be on-hand to help us celebrate, along with other players from our inaugural decade (players TBA).

Godden played three seasons, from 1978 through 1981, registering an amazing 152 goals and 194 assists along with 508 penalty minutes in 194 career games played.

Godden’s 87 goals, in the 1980-1981 season, is a Canadian junior hockey record that still stands today. The former Spits captain went on to score 13 more times in the playoffs that year, giving him a mind-blowing 100 for the year.

Godden’s #15 was later retired and hangs in the rafters at the WFCU Centre.

Miller played three seasons for the Spitfires in the former Southern Ontario Junior Hockey League (SOJHL) from 1972 to 1975, before captaining the club into what is known as the franchise’s ‘modern era’, its first season in the former Ontario Hockey Association.

Miller’s #23 was later retired and hangs in the rafters at the WFCU Centre.

Hedges was also a member of that first ‘modern era’ Spitfires club in 1975-76. In fact, he scored the first goal in club history on September 25, 1975, versus the Oshawa Generals at the Windsor Arena.

Hedges has gone on to become a prominent Ottawa area lawyer and is still involved in the game after all these years, as a highly-respected player agent.

A SPECIAL EVENING TO COME

In addition to what will be a great test versus the Kingston Frontenacs, we’ve got an entire night of fun and memories lined up.

The first 500 fans to arrive at the game will receive a limited edition collector puck, complete with our 40th Anniversary logo, commemorating Hedges’ first franchise goal.

End of 1st intermission: On-ice ceremony including a Windsor Spitfires Foundation cheque donation to a local organization, presentated on behalf of 1975-85 alumni.

2nd Intermission: Godden, Miller and Hedges will be signing autographs on the concourse and there will also be a jersey raffle.

For tickets to this very special evening, visit WindsorSpitfires.com, the TekSavvy Box Office or call (519) 254-5000.