On May 8th, 2009, Taylor Hall’s goal at 2:09 of the first overtime lifted the Spitfires to a 2-1 win over the Brampton Battalion in Game Five of the Ontario Hockey League Championship, giving the Spitfires their first league title in 21 years.

Representing the OHL at the 2009 MasterCard Memorial Cup in Rimouski, Quebec, the Spitfires quickly found themselves in a dire situation, dropping their first two round-robin games to the Drummondville Voltigeurs and the host Oceanic.

It was in the lose-or-go-home third game that the club’s historic run began.

A goal by Ryan Ellis early in the third period stood up as the winner, as the Spits beat the Kelowna Rockets 2-1 to stay alive in the tournament.

Dale Mitchell’s natural hat-trick in a 3:33 span of the third period helped the Spits eliminate Rimouski in a thrilling, 6-4 win in a single-elimination, tie-breaker that sent Windsor to the semi-final against Drummondville. Tied at 2-2 in the first overtime period, Adam Henrique scored the overtime winner at 4:31, setting up a rematch with the Rockets with the title on the line.

The Spitfires built a 3-0 lead through 40 minutes on goals by Henrique, Mitchell and Rob Kwiet, on their way to a 4-1 win – becoming the first team in MasterCard Memorial Cup history to lose its first two games and come back to win it all. 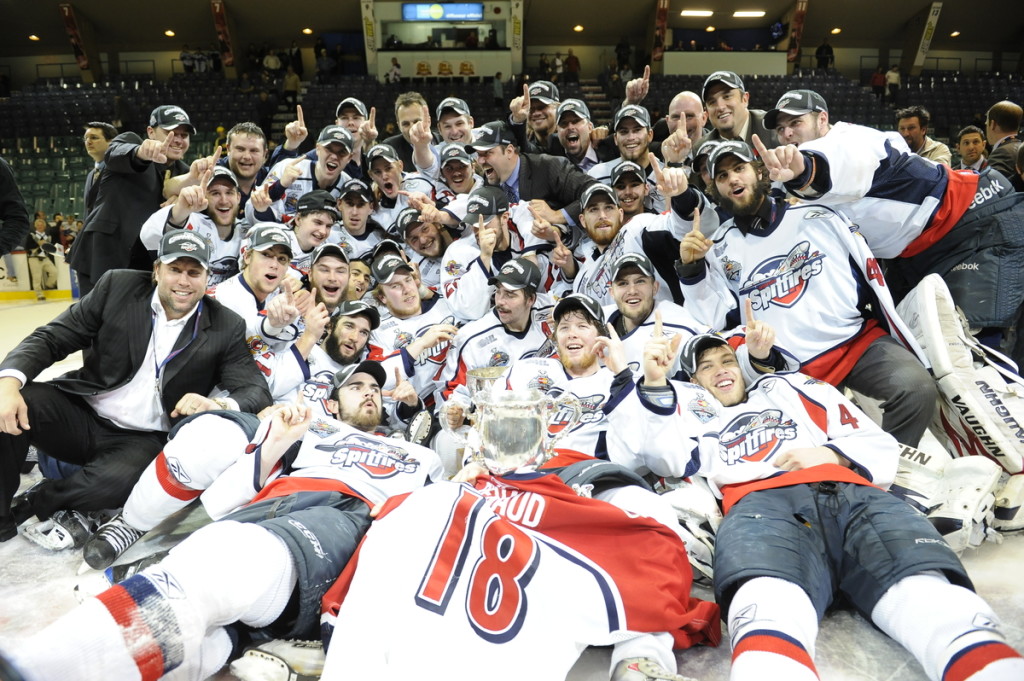 Facing elimination, the Spitfires escaped the Kitchener Memorial Auditorium with a dramatic, 7-5 win, sending the series back to the WFCU Centre. The Spits won 3-0 at home in Game Five and again beat the Rangers on home ice (6-4) in Game Six to force a decisive Game Seven, which the Spits won 4-1 to win the Wayne Gretzky Trophy as Western Conference Champions.

Riding the momentum of another historic playoff achievement, the Spits went on to sweep the Barrie Colts to win their second consecutive J. Ross Robertson Trophy as Ontario Hockey League Champions.

Representing the Ontario Hockey League at the 2010 MasterCard Memorial Cup Championship in Brandon, Manitoba, the Spitfires steamrolled their way to a second-consecutive title, beating the host Wheat Kings 9-3 in Game One, taking a 6-2 victory over the Calgary Hitmen in Game Two and a 4-3 overtime win over the Moncton Wildcats for a perfect 3-0 round-robin record.

In the final, the host Wheat Kings were once again no match for a red-hot Spitfires club, which won 9-1 in the final, becoming just the eighth club to win back-to-back MasterCard Memorial Cup titles. 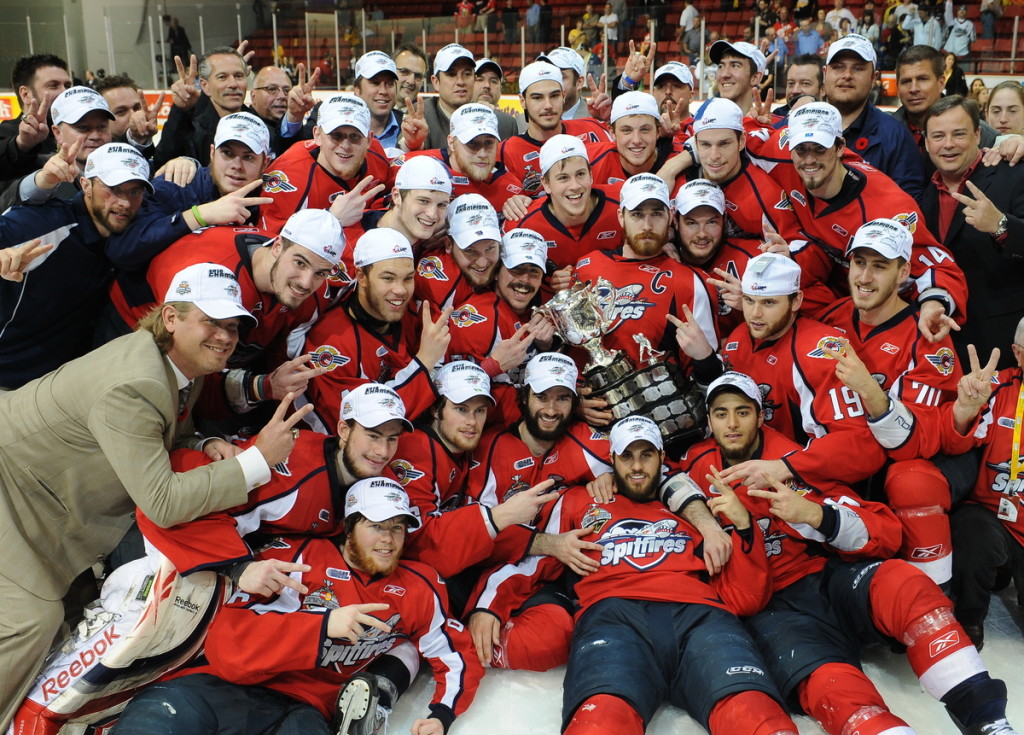 The Spitfires finished the regular season fifth in what was the toughest Western Conference in the modern era of the Ontario Hockey League. That meant a classic first-round playoff match-up with the London Knights, in which the Spitfires took a 3-1 lead in the series on Graham Knott’s overtime goal in Game 4 of the series at the WFCU Centre before ultimately fallingl in seven games.

The loss left the club disappointed but undeterred, as it embarked on a stretch of 44 days before hosting the 2017 Mastercard Memorial Cup on May 18th.

The Spitfires were labelled the decided underdog in a tournament that featured the champions of the Quebec Major Junior Hockey League (Saint John SeaDogs), Western Hockey League (Seattle Thunderbirds) and OHL (Erie Otters). But the Spits showed no rust, sweeping the round-robin before winning a 4-3 thriller over Erie to capture the title – its third in nine years – before a sold out home crowd on May 28, 2017. 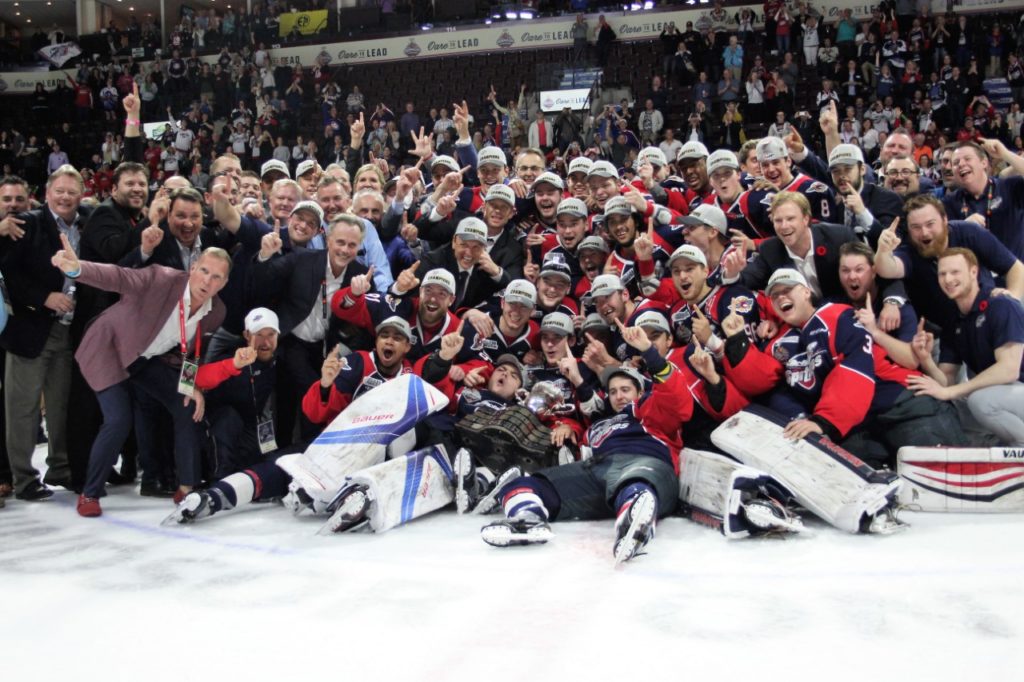