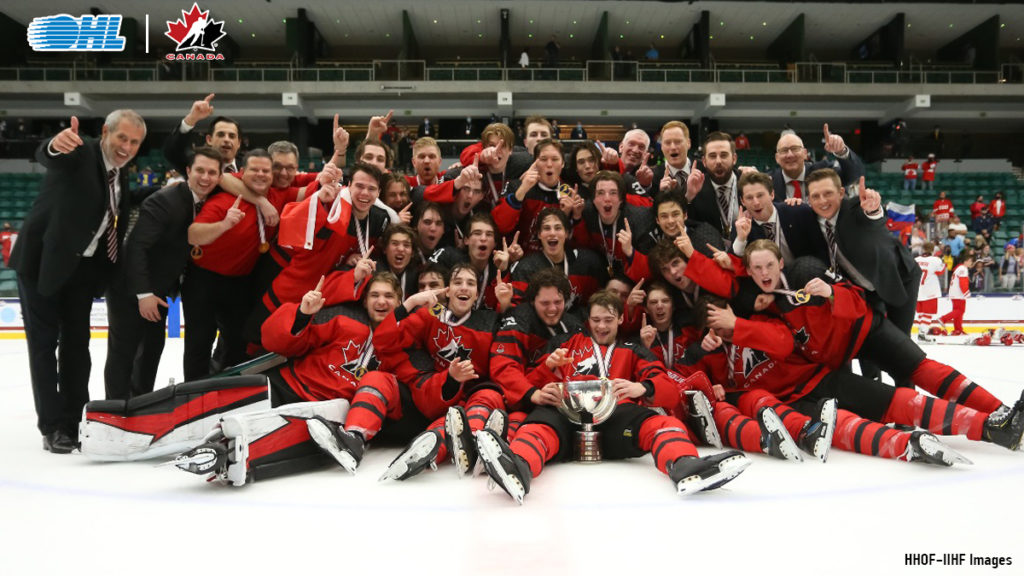 Toronto, Ont. – The Ontario Hockey League is pleased to congratulate 13 OHL players who will return from the Lone Star State with gold medals after defeating Russia by a score of 5-3 in the IIHF World Under-18 Hockey Championship gold medal game on Thursday in Frisco, Texas.

Kingston Frontenacs star Shane Wright found the back of the net twice as Canada’s National Under-18 Team completed a perfect 7-0 tournament, outscoring opponents 51-12 in the process to claim their first U18 Worlds gold since 2013.

“It means the world to this country, to the guys in our dressing room, all of the coaches and all of the staff,” said Wright after the win. “Just the effort we put in, how hard everyone has worked since day one. I couldn’t be prouder of the work everyone has put in and all the sacrifices that have been made.”

Russia presented a new challenge to Canada in the early going, with tournament scoring leader Matvei Michkov netting his 12th of the U18 Worlds 5:13 in, marking the first time Canada had surrendered the first goal in the event.

“We had scored first every single time, which is a great thing, but we knew it was going to happen,” said Canadian coach Dave Barr, who was an OHL Coach of the Year with the Guelph Storm in 2006. “We talked about it in the first intermission about playing from behind and how we aren’t going to change the way we play the game. We just did what we needed to do to work our way back into the game.”

Just over a minute after a denied penalty shot, exceptional talent Connor Bedard (Regina Pats) beat Sergei Ivanov on the backhand with 4:01 remaining in the first to tie things up as Chase Stillman (Sudbury Wolves) picked up a secondary assist. Russia quickly responded with a goal from Dmitri Buchelnikov before Wright ripped home a wrist shot on the power play to make it 2-2 after one.

A shot from a tight angle off the stick of Brennan Othmann (Flint Firebirds) put Canada in the lead 3-2 off a feed from Ethan Del Mastro (Mississauga Steelheads) 4:42 into the second. Logan Stankoven (Kamloops Blazers) delivered a wrist shot to double the Canadian lead near the period’s end as Brandt Clarke (Barrie Colts) and Wright pitched in with assists.

Following a scoreless nine minutes to start the. third, Vladimir Grudinin brought Russia back within one on the power play. Wright ultimately struck on the empty net with 40 seconds remaining off an impressive pass from Bedard to seal an undefeated tournament for Team Canada. With his ninth goal, Wright surpassed Connor McDavid‘s 2013 mark of eight to set a Canadian record at the U18 Worlds.

Ben Gaudreau (Sarnia Sting) amassed 31 saves in net to improve to 5-0 for Canada as the shots ended an even 34-34.

Gaudreau? Good, yo.@BenGaudreau03 is your Top Goaltender, and why not?

“It was really exciting, the last minute felt about as long as the entire game,” said Gaudreau post-game. “Once Shaner (Wright) put the icing on the cake there with 40 seconds left it really set in. The feelings can’t really be described. I couldn’t have done this with a better group of guys.”

Wright finished the tournament tied for second in scoring with fellow exceptional status forward Bedard, racking up 14 points (9-5–14) in just five games, two back of tournament-leader Michkov of Russia who wound up with 16 points.

Clarke finished tied for second in tournament scoring by defencemen with seven points (2-5–7) in as many games, being named to the event’s media all-star team.

Between the pipes, Gaudreau paced all goaltenders with five wins, a 2.20 goals-against average and .919 save percentage over five games to be recognized as the tournament’s top goaltender by the IIHF directorate.

“I have had a great time coaching this team,” said Barr. “It was a lot of fun to be able to bring the gold medal back to Canada, and I was very fortunate to have two great assistant coaches in Mike Stothers and Gordie Dwyer. Ultimately you are trying to win the gold medal and you never know how a game like tonight’s is going to go, but we focused on what we were able to control and that gave us a great chance to win.”

13 OHL players winning gold with Canada at the U18 Worlds: