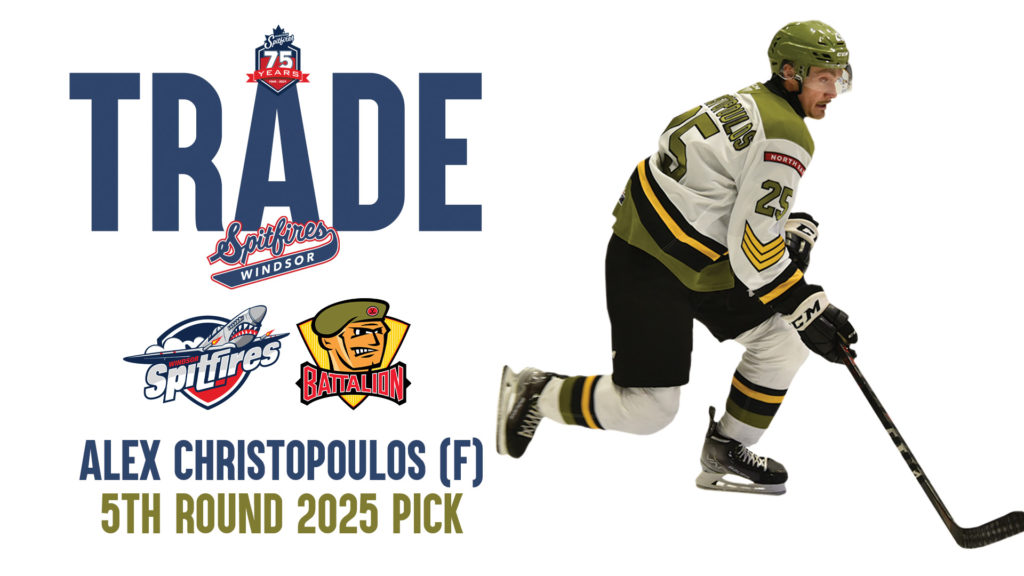 The Spitfires have sent a 5th round pick in 2025 for Alex Christopoulos from the North Bay Battalion. Christopoulos is a 2003 born forward scored 49 goals and 44 assists for 93 points in 43 games with the Don Mills Flyers minor midgets, the 2018-19 GTHL and OHL champions before being drafted by the North Bay Battalion in the 2019 OHL Priority Selection in the third round 50th overall.

The Richmond Hill native appeared in 57 games in his rookie OHL season scoring 12 goals and recording 4 assists. This season Alex has scored one goal and recorded one assist with North Bay.

Bill Bowler spoke about the addition of Alex to the team.

“Alex is a hard-working player that plays with pace and will bring a lot of energy to our team.” Bowler said. “We welcome him to this new opportunity here with the Spitfires.”

Alex Christopoulos spoke on the trade.

“It feels great, I will have a great opportunity with the Spitfires and I am excited to be with this group.” Said Christopoulos. “I look forward to the change of scenery and to play with a new group of guys and get things going.”

Alex spoke on playing against his brother who is a defenceman on North Bay.

“I think it will be an interesting rivalry with my brother once we get to play the Battalion next season.”

Christopoulos will join the Spitfires ahead of tomorrow’s practice.

Christopoulos will wear the number 48.