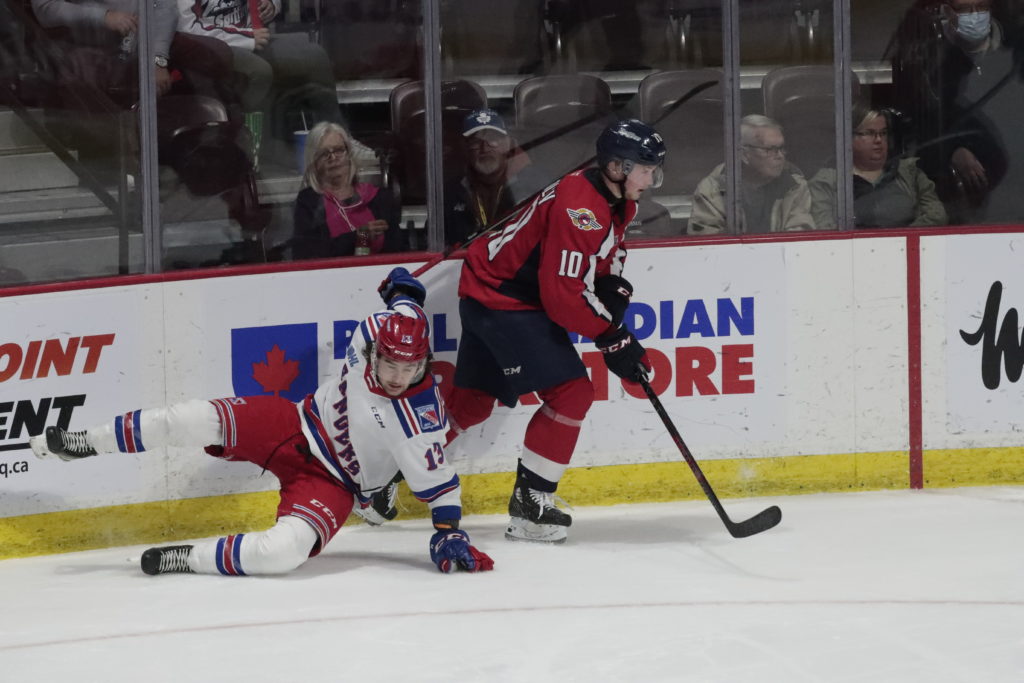 The Spitfires showed their dominance as they looked to return to form and earned their 2nd straight win and 2nd at The Aud this season.

In the first period, the Spitfires took the lead just 4 minutes in. Alex Christopoulos stayed hot scoring his 18th of the season and 4th in 4 straight games. Peer had the lone assist on the goal. The Spitfires led in shots 13-9 after the period.

In the second frame, the Rangers would tie the game just 3 minutes into the period with Rehkopf’s 11th. The Spitfires would respond just two minutes later. Colton Smith scored his 9th of the season on the doorstep from Peer and Cristoforo to restore the 1 goal lead. Seven minutes after that the Spitfires scored to take a 2 goal lead on the powerplay. The point shot from Renwick appeared to be tipped in front by Greentree which would be his 7th of the season and gave the Spits a 3-1. (At the end of the game the goal was still credited to Renwick which would be his 8th).

In the third period, the Spitfires would take over and seal the deal in Kitchener. Peer would add his 11th in a highlight reel backhand snipe from Smith on a great drop pass. The Spitfires would follow that up with a slick goal, O’Flaherty dropped it to Morneau who dropped it to the slot to Miedema and his shot-pass was gloved by Morneau and put down on the ice and he backhanded it home to make it 5-1. Kitchener would add a goal on the powerplay to make it a 5-2 game. With 26 seconds left Maggio would roof one bar down to finish off the Rangers and the Spits would win 6-2.

The Spitfires are back in action on Saturday December 3rd when the Barrie Colts come to town! Puck drop is scheduled for 7:05pm. Be sure to bring your teddy bears for our annual teddy bear toss to support Sparky’s Toy Drive!

Spitfires Fall to Oshawa 9-5
6 days ago