MENU
Get the latest 75th Anniversary Gear at Spitsgear.com
November 27, 2021

Spitfires Rally Back But Fall in OT 6-5 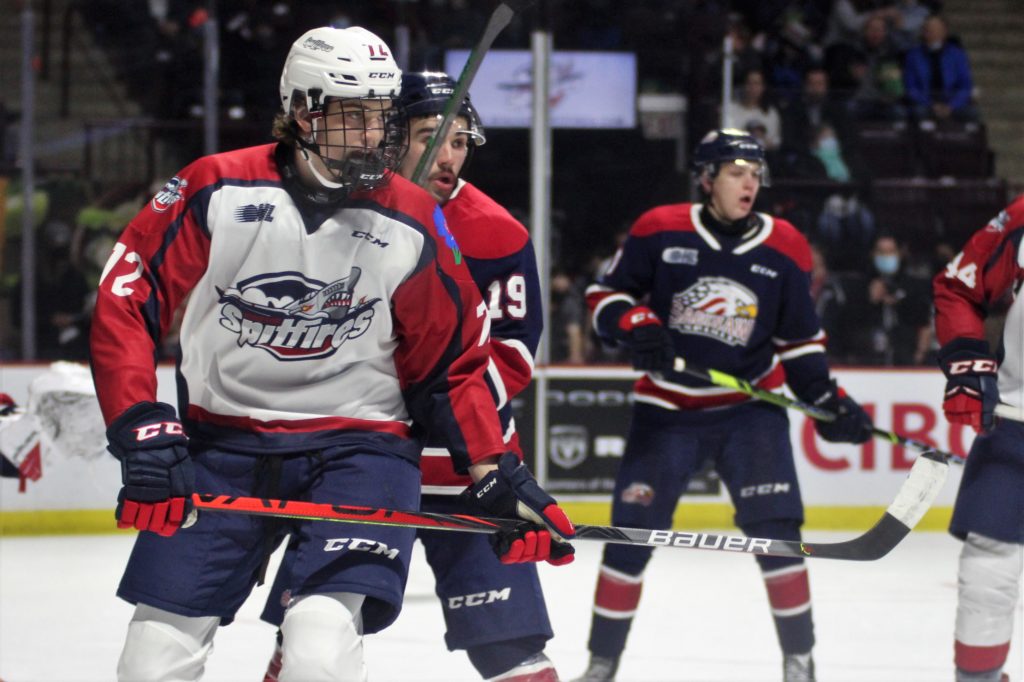 The Spitfires rallied back again versus Saginaw on Saturday evening but came up short in overtime.

In the first period the game was heavily penalized with the Spitfires having 3 powerplays and Saginaw having 4. It was the Spitfires who got on the board first on the powerplay just over 3 quarters of the way through the period. It was McDonald who tipped in a Henault shot for his 12th on the season. Johnston picked up the 2nd assist. The lead only lasted 3 minutes with Saginaw recording a powerplay goal of their own. After 20 minutes of play we were tied 1-1, shots were in favour of the Spitfires 10-9.

In the 2nd period, the Spitfires scored to make it a 2-1 game. It was O’Flaherty with his first career OHL goal on a sweet pass from Martin. After that it was much of the same as the night before. The Spitfires gave up 4 straight goals one being shorthanded to go down 5-2 with 3:39 left to play in the 2nd period. But again the Spitfires rallied back at the end of the second and into the third period. With 2:27 to play in period 2, Cuylle sniped his 15th on the season on the powerplay, with Johnston and Ladd recording the assists. The Spitfires trailed 5-3 after 40 minutes of play and 21-19 in shots.

In the third period the Spitfires got on the board early. Daniel D’Amico sniped his 5th on the season on the powerplay off a Saginaw turnover. Just over three minutes later Oliver Peer scored his first career OHL goal to tie the game on the powerplay. Abraham and D’Amico recorded assists on the play. With the game tied 5-5 both teams had chances to win but failed to capitalized and both teams hit the post/crossbar. With 60 minutes and a tie game we were off to OT.

In the overtime period, the Spitfires and Spirit traded chances but it was Saginaw who hooked Henault off the puck with no penalty call and they went in and scored to take it 6-5 in OT.

The Spitfires play at home versus Erie on December 2nd, puck drop is schedule for 7:30pm.