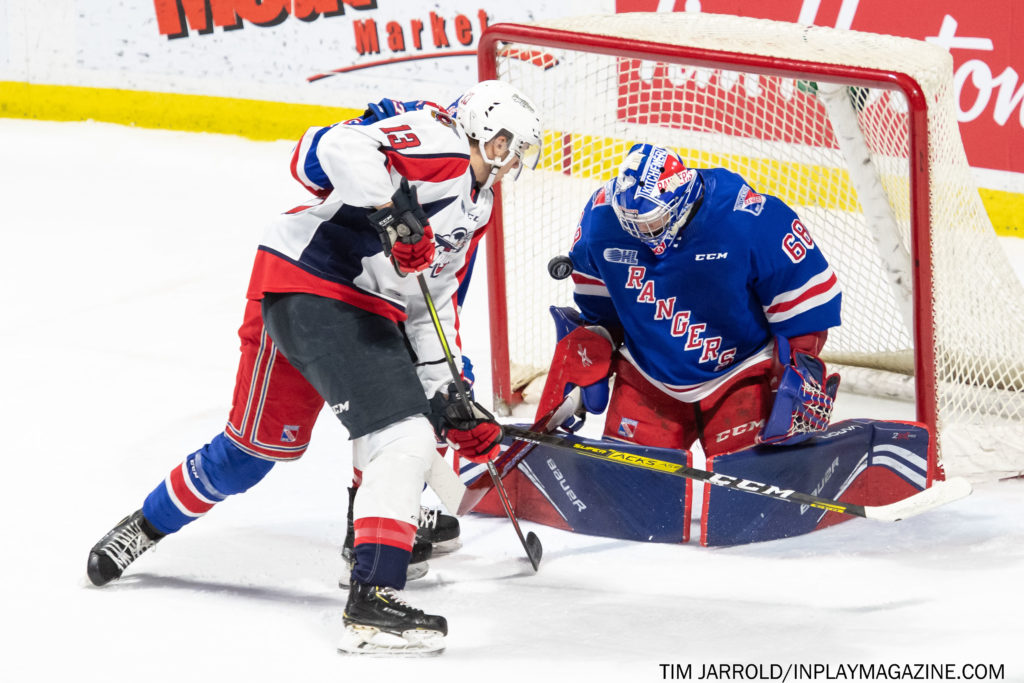 The Windsor Spitfires came up just short in a shootout but secure a third point through two of three games this weekend.

The first period got off to a fairly quick start. Just 3 minutes and 48 seconds into the game the Rangers opened the scoring on a nice passing play. The Spitfires took 12 minutes to respond on the powerplay. Henault slid the puck to Maggio who found an open McDonald on the back door to snipe his first of the season and tie the game. After twenty minutes we were tied at 1. The Spitfires trailed in shots 12-10 after the first.

In the second period, it was the Spitfires who capitalized on a turnover at the Spitfires blueline turned into an odd man rush. Johnston who fed McDonald who found Maggio in the slot who tipped it home. After 40 minutes of play the Spitfires led by a score of 2-1 and led in shots 22-19.

In the third period, Xavier Medina came up with a crazy save to keep the Spitfires ahead early in the period. But it took just over 4 minutes before the Rangers scored and tied the game. After 60 minutes we were tied 2-2, and headed to overtime. The Spitfires had a powerplay at the start of the OT frame but couldn’t convert. The OT was most 4 on 4 as no whistles were blown until late in the period. No one was successful and we were off to a shootout.

In the shootout, Pinelli scores to put KIT up by 1. Johnston shot wide. Valade was stopped by Medina. D’Amico scored to tie the shootout 1-1. Petizian scores and puts KIT UP 2-1. Sobolev ties it up and we go into extra shooters. Rehkopf scores for KIT. Maggio is stopped and Rangers win 3-2.

The Spitfires travel to Owen Sound tomorrow for a matchup with the Attack, puck drop is scheduled for 7:30pm.