MENU
Get the latest 75th Anniversary Gear at Spitsgear.com
January 14, 2022 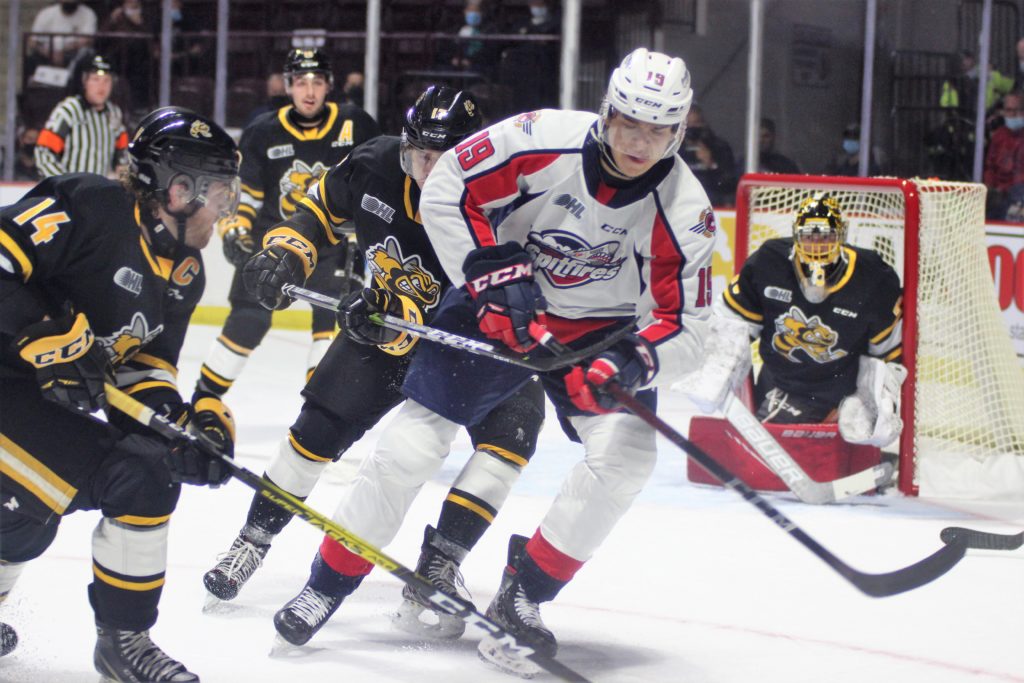 The Spitfires powerplay was clicking on all cylinders but the defence was not.

In the first period, the play was slow with Sarnia playing a trap defensive style making the Spitfires dump and chase more. Just under five minutes into the game the Spitfires were awarded a powerplay and made no mistake. Cuylle was in the offensive zone corner who left it for Johnston in the corner and Johnston fired a rocket pass through the Sarnia defenders to Zito on the backdoor who scored his 11th on the season. However, just 17 seconds later the Sting went down and scored to tie the game. The Spitfires lead in shots 9-8 after twenty minutes in a tie game.

In the second period, the Sting scored a pair of goals 5 minutes apart to take a 3-1 lead. However, the Sting got into some penalty trouble and gave the Spitfires some momentum to get back in the game. After Sarnia went up 3-1 they got a penalty after the play. Off the ensuing faceoff Johnston won the draw to Henault who fed Cuylle who skated down the wing alone and ripped his 22nd on the year just 7 seconds later. Just less than six minutes later the Spitfires tied the game on the powerplay. Perrott got the puck at the point and slid the puck to Abraham for a one-timer who got the shot on net and Daniel D’Amico on the doorstep buried it to tie the game at 3. The Spitfires lead in shots 23-15 after 40 minutes of play.

The Spitfires are back in action on Sunday January 16th at home when the Flint Firebirds come to town. Puck drop is scheduled for 5:05pm.

Spitfires vs. Sting Tonight. Watch Live and Join in on Zoom!
4 hours ago