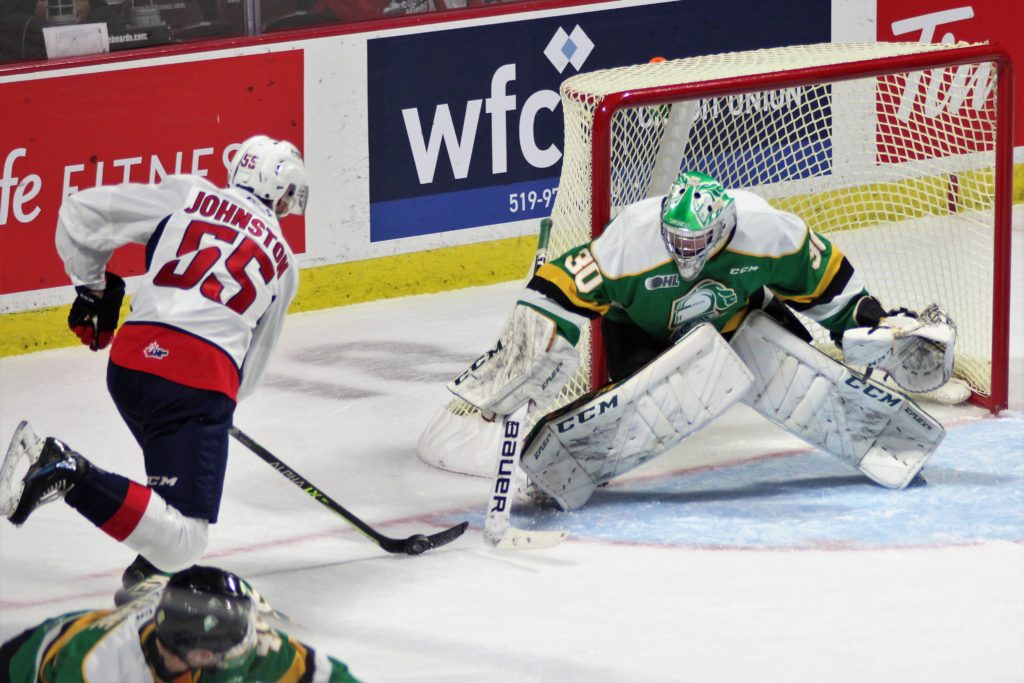 An undermanned Spitfires team had a tough go Wednesday evening versus the London Knights. The Knights coming in as the hottest team in the OHL with a 13-3-1 record.

In the first period and just 30 seconds in Renwick shot was stopped but Brochu and Johnston almost buried the rebound to give the Spitfires an early lead. But it was a scoreless first 20 minutes between the two teams. The Spitfires trailed in shots 11-10 after the first period.

In the 2nd period the scoring started to come for both teams. Will Cuylle scored his 14 on the season to give the Spitfires a 1-0 lead just 47 seconds into the period. Johnston had a great assist on the play displaying excellent patience and Henault had the 2nd assist. The Knights tied it up on the powerplay 9 minutes later. The Spitfires had a powerplay of their own 3 minutes later and Johnston cashed in on his 10th goal of the season. McDonald and Zito both recorded assists on the goal. The lead was fairly short lived when London’s Evangelista scored shorthanded at 1:45 left in the 2nd period to tie the game. The Spitfires lead in shots 25-20 after 40 minutes of play in a 2-2 game.

In the third period London scored just 3:53 into the period which turned into the game winning goal. The Knights added an insurance goal with 11 minutes to go but the Spitfires could not solve Brochu in the third period. London added a late empty net goal.

The Spitfires are back in action at home on Friday November 26th at 7:30pm when the Saginaw Spirit come to town.