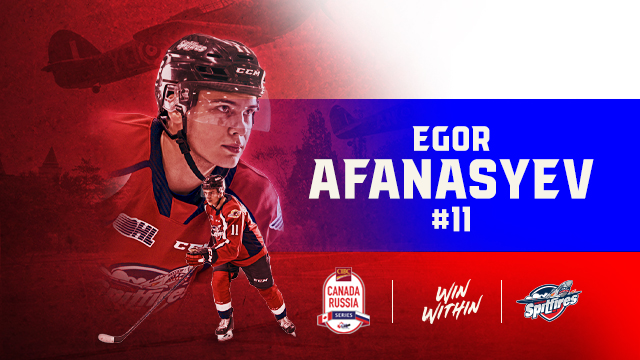 (Windsor, ON) – Spitfires’ Egor Afanasyev will suit up tonight for the Russian National Junior Team in Game 3 in CIBC Canada Russia series in Kitchener, ON.

A second round (45th overall) pick of the Nashville Predators in the 2019 NHL Draft, Afanasyev is in his first OHL season with the Windsor Spitfires after his rights were acquired from the Ottawa 67’s in December 2018. The 18-year-old from Moscow, Russia has 14 points (6-8-14) through his first 14 games of the 2019-20 season and recently signed a three-year entry-level NHL contract with the Predators last week. Afanasyev was originally Ottawa’s sixth round pick in the 2017 OHL Priority Selection.

ABOUT THE CHL CANADA RUSSIA SERIES

In 16 years of competition, the Russian National Junior Team has played to a record of 33-60-0-3, winning last year’s series by an 11-7 mark in points.

The 2019 CIBC Canada Russia series is proudly supported by title partner CIBC, and associate sponsors Kia Canada, Cooper Tires, and Kubota Canada.  All games will be broadcast nationally on Sportsnet and TVA Sports.

For event information including how to purchase tickets please visit http://chlcanadarussia.ca.