MENU
Get the latest 75th Anniversary Gear at Spitsgear.com
October 8, 2021 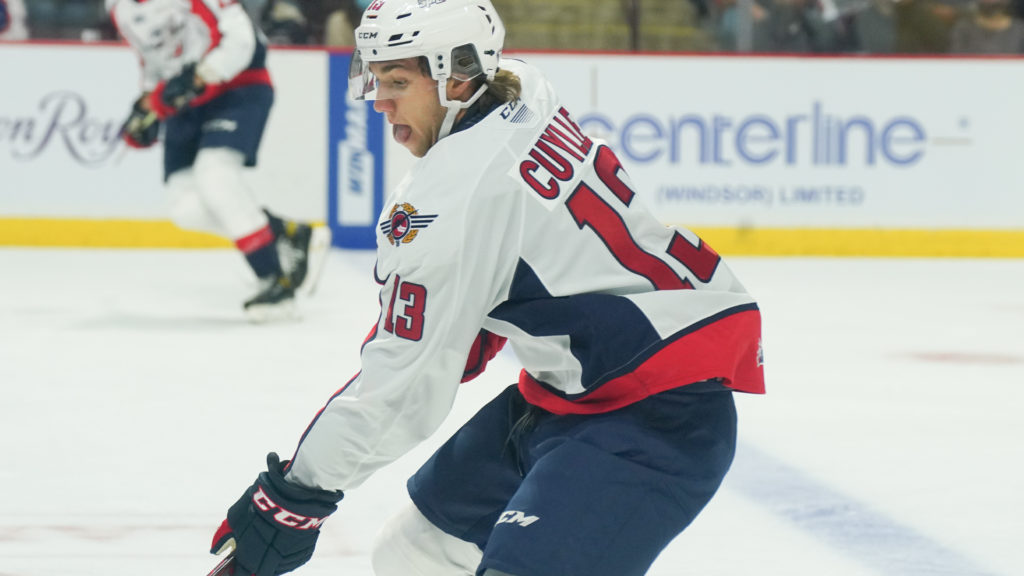 The Spitfires travelled to Sarnia for the 2nd game of the home and home series to kick off the season. The Spitfires were looking to avenge their home opener loss to the Sting just last night.

This game was a tightly contested affair with chances going both ways through each period. However, it was Sarnia who struck first on a breakaway. That was the lone goal in the first twenty minutes, but it did appear that Dylan Robinson may have scored on a wrap-around but then it was ruled no goal after review. Spitfires lead the shots 12-3 after the first period.

In the 2nd period there was much of the same back and forth play. Each team traded more chances but again it was Sarnia to open the scoring in the period and Voit put the Sting up 2-0. After forty minutes the Spitfires lead 27-14 in shots.

With the Spitfires trailing 2-0 in the third, Dillingham took a slashing call after snapping Ladd’s stick in half sending the Spitfires to the powerplay just over four minutes into the period. The Spitfires cashed in on the powerplay just 23 seconds later on a sweet passing play from Robinson to Zito to Johnston who buried it for his first on the campaign. 10 minutes went by with no scoring a Sarnia taking one penalty but the Spitfires couldn’t bury it. With just under five minutes remaining Pasquale Zito found himself a glorious opportunity sniped it short side for his third goal of the season. Miedema and Ladd got credit with the assists. The Spitfires pushed the game into OT. Shots were 41-20 after three periods.

The overtime period was short lived and for good reason as Wyatt Johnston stole the puck off the Sarnia defender and pulled the Sarnia netminder towards the right side of the goal and fed a back pass to a flying Cuylle in the slot who buried the OT winner. Spitfires complete the comeback and get their first win on the season.

The Spitfires faceoff against London on Thanksgiving day, puck drop is scheduled for 2:05pm.