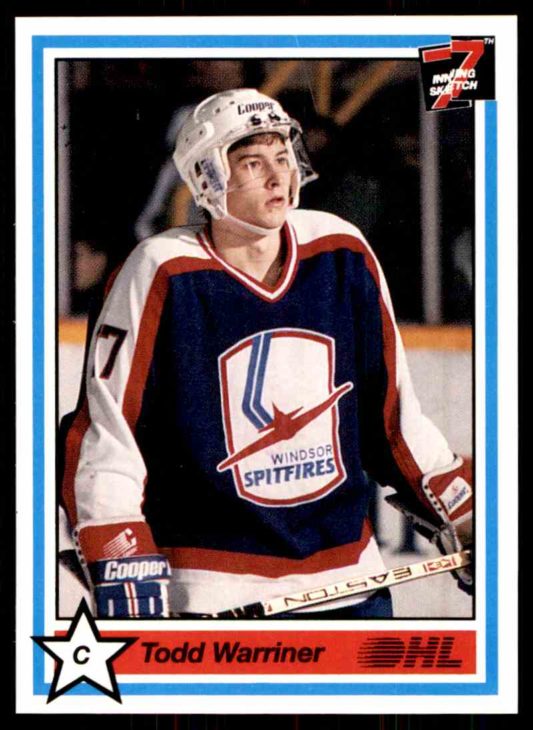 The Spitfires drafted me in 1990 in the first round, third overall after playing Junior B for the Chatham MicMacs. That year I was lucky enough to play for a great coach in Wayne Jacklin, who would later partner with Vern Stenlund to coach the Spitfires in 1997-98. That was a special year in Chatham history, as my teammate Brian Wiseman set the Junior B scoring record which still stands today. He had 147 points in 42 games.

During our playoff run in Chatham that spring, Spitfire head coach Brad “Motor City” Smith was a permanent fixture at our home games and would chat with my parents and Coach Jacklin regularly. Having him there and showing interest in me pushed my game to another level. Things happened fast, and I wasn’t sure I was ready for the OHL but Motor City Smitty assured me I was “his guy,” and the Spits would take me with their first pick that May. They did…

My first season with the Spits was an eye-opener. I was only 18 months removed from playing Bantam hockey and everything on the ice was an adjustment. The opposition was bigger, stronger, faster and competed harder. Most of them had their sights set on playing professional hockey. Off the ice, though, things couldn’t have been easier for me. I moved in with Bob and Val Boughner.  Yes, that Bob and Val…Spits President/Owner/former Coach’s parents. Young Bob was playing for the Soo Greyhounds at the time. Every August he’d move up north and I’d move into his room! It was incredible. Bob’s younger brother Doug was a year older than me and we got along right away. Doug was on the student council at Herman High School, where all the Spits were enrolled. He made that adjustment easier by introducing me to everybody. I had an IN…Doug was connected! Bob’s buddies were always hanging around the house too and although they were a few years older than me, they were always nice and made my transition to a new city and new school smooth. I was living with this great hockey family, who knew the drill already through their own son. They made sure I followed the rules and went to school. I was surrounded by good people from day one.

Coach Motor City encouraged us to join in with high school activities. One cold November night, the five rookies on the team became school cheerleaders during a football game at Windsor Stadium. Assistant Coach Dave Prpich even introduced us to the crowd during halftime as we became the Spitfire version of a halftime show. We had a great time showing the crowd our football skills running plays and clowning around.

As a rookie, I slugged bags, picked up pucks, and cleaned the dressing room like everyone else. On our first road trip, I had an unusual rookie moment. We’d opened the season on a Thursday night at the old Barn then loaded the bus on Friday morning for North Bay. Bert Templeton’s Centennials played a tough, in your face, aggressive style of hockey and the older guys thought they would play up this reputation on poor old me. On the way to North Bay, I was sitting in the front of the bus just behind the coaches. I am sure the coaches were all in on what the veterans had in store for me.  Every 30 minutes or so a veteran player would walk to the front, lean down and whisper in my ear the same story. The story went something like this. “Toddy, um…just a heads up about tonight ahh….there’s this guy named um…Casey Jones.. .on the Centennials…I mean, this guy…geez…this guy is…just a crazy lunatic…a real hard-nosed cruncher…..and um.. for some strange reason…every year…he wants to cream the 1st rounder from every team…he may even come looking for you in the warmup….but hey good luck out there kid!” This was followed by a smack on the back or tussle of my hair before they returned to their seat. A half an hour later, another veteran would tell me the same story. For eight hours, I white-knuckled it all the way to North Bay.  Keep in mind this is before the internet, and the OHL Yearbook didn’t come out until Christmas…I had no idea who Casey Jones was! I got dressed for the game and the guys decided to let me go out first for warmup. I was thinking, “Geez, thanks for having my back boys!” I did the usual victory lap around the ice by myself with my head on a swivel looking for this Casey Jones guy. During my lap, my teammates were on the bench pointing to the corner of the arena and laughing. As it turned out, Casey Jones was the Centennials mascot! They got me pretty good with that one! I scored my first OHL goal that night, so it was a memorable trip to North Bay!

On the ice, I hit it off with Cory Stillman immediately. Cory came from Peterborough and was the best playmaker in the draft. I liked to shoot, and he liked to pass. Our on-ice chemistry worked right away. We made the playoffs in my first year but lost in the second round to an excellent Niagara Falls team.

Today I’m married with four kids of my own and live just an hour east of Windsor in my hometown of Blenheim. Over the last five years, I’ve been hired as the Colour Voice for the Spitfires. My partner Chris McLeod and I bring fans home game broadcasts on Your TV Windsor. I love being at WFCU and feeling the energy in the building on game nights. It has given me the chance to stay connected to the game. It allows me to share a story or two from my time as a player and get reacquainted with families, friends, and coaches from Windsor Essex County area. It makes me proud to have been a Spitfire when I walk in the new arena. I am also proud of the guys who own the team and what the Spitfires have become in the City of Windsor!

I hope you enjoyed my story.  It was great to share it again!