MENU
Get the latest 75th Anniversary Gear at Spitsgear.com
February 11, 2020 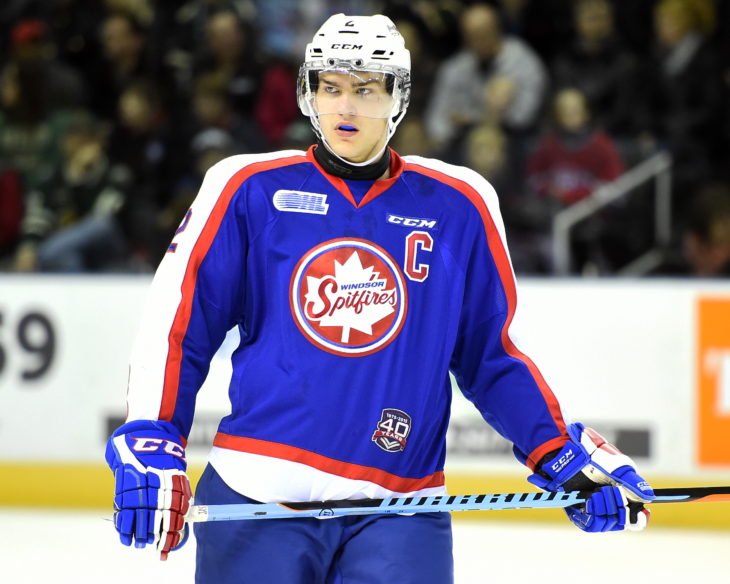 I was drafted to the Windsor Spitfires on April 5th, 2012, in the second round 41st overall out of the Guelph minor hockey organization.  I remember the day vividly as it was two days before my mother’s birthday, and was the exact gift I intended to give her. The indescribable feeling of hearing from the legendary Warren Rychel and the Boogieman Bob Boughner is a moment I will never forget. I was so young at the time, but I still knew it was only the beginning of a very long journey that would take a lot of hard work. I still remember getting to Windsor in the summer before my first season and meeting some of the guys. It was quite eye-opening to say the least; some great Spitfire alumni were participating in the skates. Admittedly, being introduced to Zack Kassian for the first time had me completely star struck. Little did I know that I would go on to play and become best friends with so many great players – many of whom are currently enjoying much success at the highest-level hockey has to offer.

Then there was my billets, Paul and Gabe. I cannot express how lucky I am to have had the opportunity to have those two in my life. I can honestly say I love them like family, and I wouldn’t be the person I am today without the continuous support that they provide for me to this day. Funny story about Paul, – when Dave Matsos was conducting interviews to see if they would be fit billets for the team. Paul entered the process under the assumption they would have to pay the Spitfires every two weeks in order to keep me and let me live with them. While the Spitfires did not take advantage of a new revenue stream, they did land two of the most exceptional people a young man could ever live with. Telling Paul and Gabe that I had been traded to Sudbury – and would be leaving in less than 24 hours – was quite possibly the hardest thing I had to do in my life. After being assured I would be in good hands in Sudbury, we parted ways knowing that it was definitely not the last time I would see them. They made the trip all the way up to Sudbury just to cheer me on, and I am still in contact with them to this day, taking every opportunity I can to see them. I still have a key to their house to this day, and they have told me that the door is always open.

Individuals that have had an impact on my life simply because I was part of the Spitfire family is, for lack of a better term, ridiculous. I was beyond privileged to interact daily with coaches like Bob Boughner, Bob Jones, Dave Matsos, Jerrod Smith, Trevor Letowski, and Rocky Thompson – all of whom devoted countless hours to making me a better player, and man — leaving home at the ripe age of 15 forces one to grow up quickly. I could write an entire essay thanking each person within the organization – from Warren Rychel at the top, all the way to Matty, who helped us out in the room.

Of course, the most significant relationships I had were through the guys on the team. Even today, my favourite memories and stories come from my days in Windsor, particularly my last year. That was the closest team I had been a part of. The friendships that were forged under the best and worst of circumstances will undoubtedly last a lifetime. A funny story from my last year; we were not doing so well and were anticipating an extremely hard practice from Rocky. The Hockey Gods, we thought, struck the power of the WFCU out minutes before we were due on the ice. The team was ecstatic -presuming we had gotten out of the skate. Rocky promptly entered the room and told us to throw running shoes and shorts on. We ran to the hill in Tecumseh, in 35-degree weather, and proceeded to work harder than any of us had ever imagined. I could write a book about all the stories that I remember from my time in Windsor, from Misha throwing his ping pong paddle through the dressing room wall, to Warren Rychel coming out and playing in our three on three tournaments…. Which were VERY competitive.

Currently, I find myself studying at Queen’s University while playing on the men’s hockey team with other fellow alumni in Slater Doggett and Graeme Brown. It may not be where I envisioned myself after I was drafted to Dallas on my 18th birthday, but I have not given up on the dream of someday playing pro hockey. We have quite the hockey program growing up here in Kingston, with expectations to be at the National Championships year in year out. While the jersey and colours may be different, every day, I take pride in exemplifying the exact same winning attitude and environment to all facets of my life that were instilled in me during my tenure in Windsor.

I would be remiss if I didn’t touch on some of the great people that helped me and countless others through high-school while in Windsor. All the teachers were so supportive of the commitment that it takes to be an OHL hockey player chasing the dream of being a professional hockey player. Without Mr. Gignac and Mrs. Chevalier, I think it would be a miracle for some of the guys I went to school with to do as well as they did or even graduate…

Looking back at it all, it was one of the best times of my life. I would not trade the ups, and believe it or not, even the downs, for anything in the world. Sincerest apologies if I missed thanking anyone, as an attempt to wrap this letter up has counter-intuitively resulted in a continuous flow of positive memories. From the season ticket holders I would see before every home game (Star, Bill, and Richard -otherwise known as “flag guy”) to the usher who wrote out a quote that I taped to my stall – and has now found a new home on my desk I will end this by sharing that quote that has inspired me day in day out. : “Success requires persistence. The ability to not give up in the face of failure”. 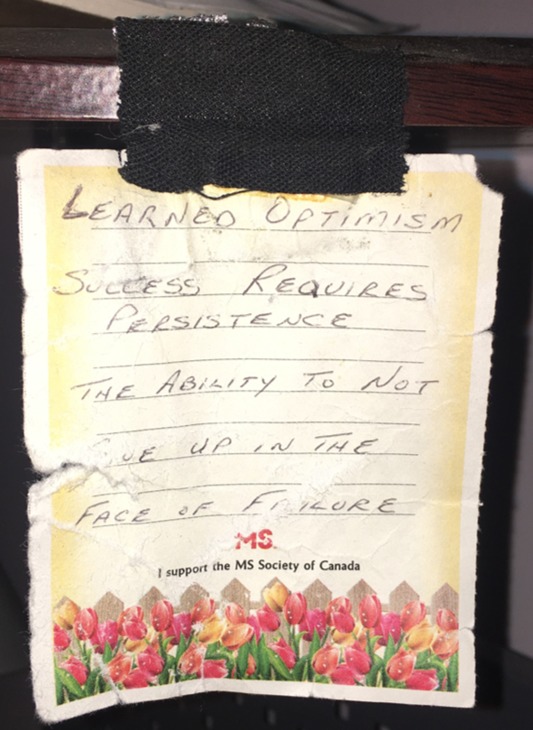