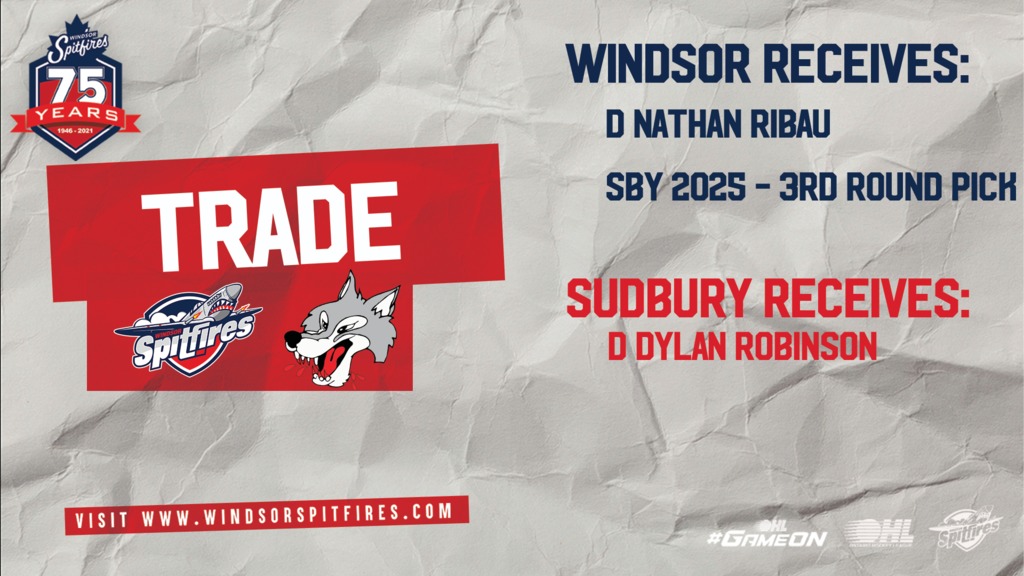 The Spitfires have acquired defenceman Nathan Ribau and a 3rd round pick in 2025 in exchange for Dylan Robinson.

Robinson was Windsor’s third round pick in the 2018 OHL priority selection draft. Robinson split time between the Lasalle Vipers and the Spitfires in his rookie season. He managed to get into eight games with the Spitfires and recorded 4 points including his first career OHL goal. Robinson’s second season he played full time for the Spitfires appearing in 55 games while collecting 18 points and was a plus 13. Through the first four games Robinson has recorded 3 assists.

“We would like to thank Dylan for his time in Windsor.” Bill Bowler said. “We have seen him grow through our affiliate in LaSalle and here in Windsor. We wish him the best in Sudbury.”

Ribau a native of Oakville, Ontario was drafted by the Sudbury Wolves also in the 2018 OHL priority selection in the 4th round 78th overall. Ribau then played one season for the Oakville blades before making the jump into the OHL. During the 2019-2020 season Ribau played in 40 games for the Wolves and recorded three points including his first career OHL goal. Through the first 6 games of 2020-21 Ribau has already broken his career high in points with 4 (1g, 3a) on the season.

“Nathan is a competitive player that we think will help our club.” Bill Bowler said. “He is a character kid and we welcome him to the Spitfires.”

“Its something I wasn’t expecting.” Ribau said. “But I am excited for a new chapter in my career and I am excited to get down to Windsor.”

The Spitfires also receive a third-round pick in 2025, there are no conditions on the pick.

Ribau will wear #8 for the Spitfires.