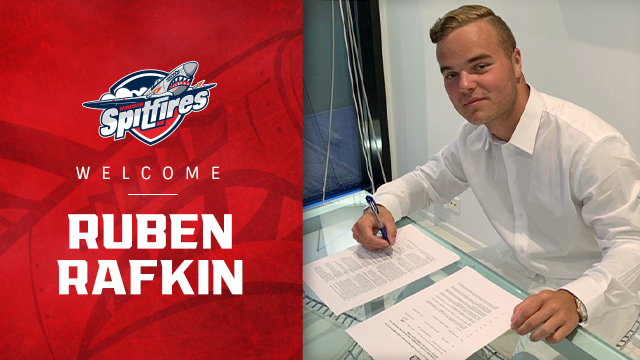 (Windsor, ON) – Ruben Rafkin has agreed to terms on a standard Ontario Hockey League player and education package with general manager Bill Bowler.

The 6’0, 188-pound Finnish defenceman spent the 2018-19 season with the Tri-City Storm of the USHL, posting two goals and eight assists along with 90 penalty minutes in 38 games.

Rafkin says, after weighing all his options, joining the Spitfires just felt right.

“I had pro offers in Finland and a (good) team in the USHL,” Rafkin said. “But with the coaching in Windsor, the quality of kids playing there, it made the most sense for me.”

Rafkin says he wants to play a big role and be a positive force, both and off the ice.

“I want to be a good teammate and play good hard hockey,” Rafkin said. “It’s a big season for me. It’s my draft year. I want the team to have a big year and if that happens, I think I will have a good year too.”