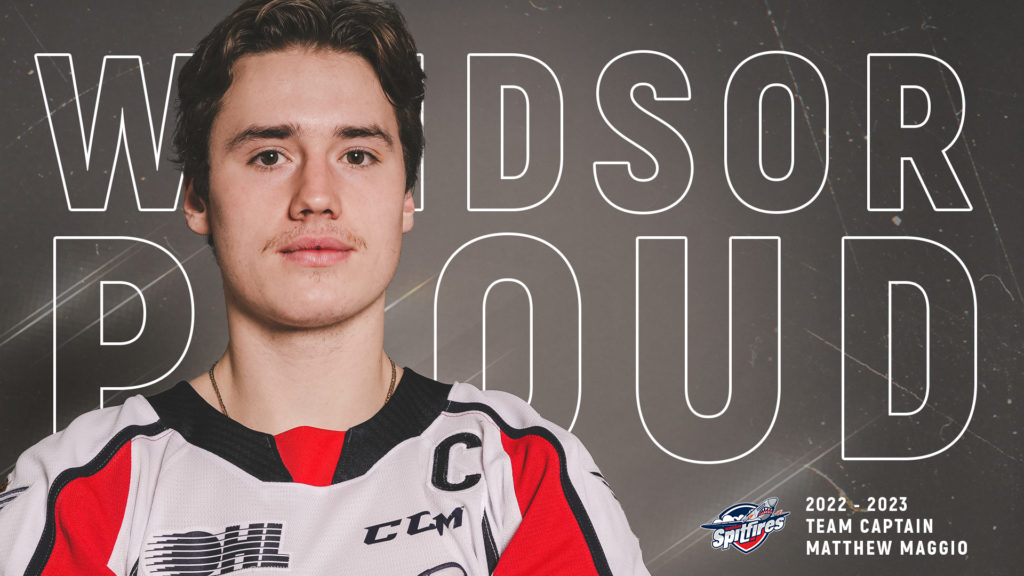 The 19-year-old who turns 20 next week, is a native of Tecumseh, Ontario was selected 86th overall in the 2018 OHL Priority Selection by the Ottawa 67’s before being traded to the Spitfires. Since joining the Spitfires, Maggio has logged 126 career regular season and an additional 25 playoff games since the beginning of the 2019-20 season.

Maggio was ecstatic to be announced as the team captain of his hometown team.

“I am humbled and honoured to be named the captain of a franchise as historic as Windsor.” Maggio said. “Growing up in Windsor I got to witness the blue collar work ethic that the people of Windsor represent, and I am eager to display and continue that same work ethic throughout the year with the team. We are excited about the upcoming journey and achieving our goal of bringing an OHL championship home to our fans.”

“Matt is a consistent performer.” GM Bill Bowler started. “From his first year in the league to now he has worked tirelessly to become an NHL prospect and earn this recognition. He is a local player that we are proud to name our captain.”

Head Coach Savard said it is an obvious choice among the staff and Maggio’s fellow teammates with the Spitfires new leader.

“We are proud to name our 2022-23 captain as Matthew Maggio.” Marc Savard said. “His leadership not only in the ice by the way he works and competes every night but off the ice the way he treats his teammates and helps our young guys out. He goes above and beyond when helping others and it is why this was an easy decision for our staff.”

Joining Maggio wearing the letters will be Michael Renwick (full-time), Maillet and DeAngelis (home games), and Abraham and Christopoulos (away games).

Renwick, 20, enters his second and final season for the Spitfires as the 2020 season was cancelled. In his first season as a Spitfire, Renwick played top minutes on the Spitfires blue line and on special teams. Renwick recorded 11 goals and 18 assists for 29 points in 67 games. In the playoffs, he added 5 goals and 9 assists for 14 points in all 25 games.

Maillet is also entering his second season with the Spitfires. He was acquired via trade in 2021-22 season. Maillet appeared in 46 games as a Spitfire and collected 8 goals and 17 assists for 25 points.

DeAngelis is entering his 2nd for the Spitfires as the 2020 season was washed out. DeAngelis was drafted by the Windsor Spitfires in the 2020 OHL Draft 36th overall. He has been a standout on the Spitfires blue line with his solid defensive play. In his rookie season, he recorded 4 goals and 9 assists for 13 points.

Abraham is also entering his 2nd season for the club. Abraha was a first round draft pick of the Spitfires in the 2020 OHL Draft. Abraham has since played in 81 regular season games and 25 playoff games since being drafted. Abraham led the team of rookies with 15 goals and 31 assists for 46 points.

Christopoulos a native of Richmond Hill, Ontario is entering his 2nd season for the Spitfires after he was acquired via trade in the 2021-22 season. Christopoulos was originally drafted to the North Bay Battalion 50th overall in the 2019 OHL Draft. Since coming into the league, Christopoulos has appeared in 142 regular season games and 25 playoff games. As a Spitfire, Christopoulos has recorded 25 goals and 15 assists for 40 points.

Spitfires Fall to Oshawa 9-5
6 days ago