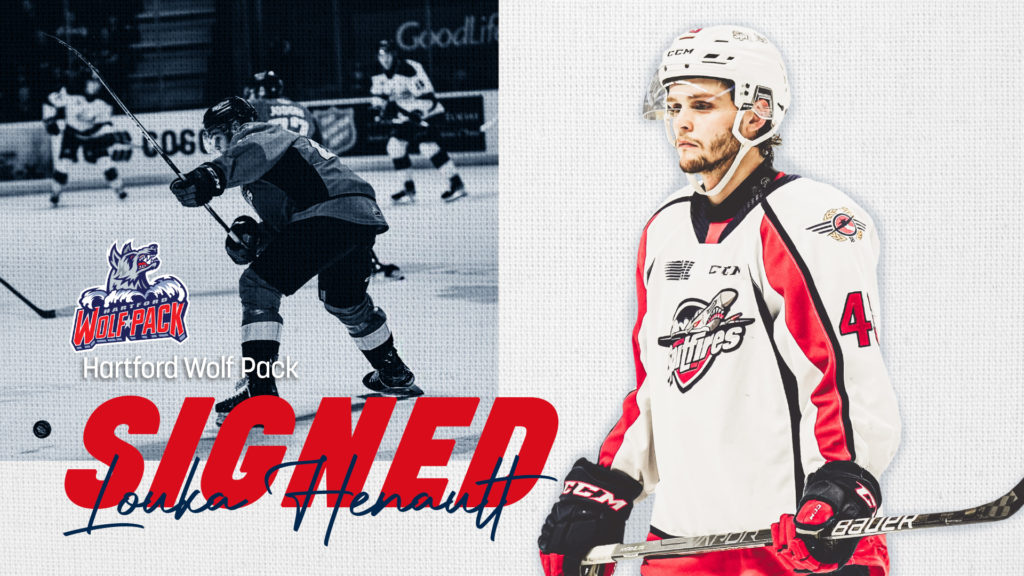 HARTFORD, CT – The Hartford Wolf Pack has announced that the club has agreed to terms on a one-year, standard AHL contract with defenseman Louka Henault for the 2022-23 AHL season.

Henault, an undrafted free agent, joins the Wolf Pack after four seasons in the Ontario Hockey League (OHL) with the Windsor Spitfires. In addition, Henault spent the 2020-21 season in Finland.

During the 2021-22 campaign, Henault appeared in 63 games with the Spitfires, setting career-highs in goals (8), assists (57), and points (65). His 57 assists led the OHL during the regular season. The native of Montréal, Québec, also appeared in 25 playoff games for the Spitfires, scoring 16 points (4 g, 12 a). Windsor advanced to Game Seven of the OHL Championship Series, where they fell to the Hamilton Bulldogs.

He is the sixth player to sign an AHL contract with the Wolf Pack for the 2022-23 campaign. Henault joins fellow defenseman Zach Giuttari and forwards Tanner Fritz, Cristiano DiGiacinto (former Spitfire), Alex Whelan, and Easton Brodzinski.

ABOUT THE HARTFORD WOLF PACK: The Hartford Wolf Pack has been a premier franchise in the American Hockey League since the team’s inception in 1997. The Wolf Pack are the top player-development affiliate of the NHL’s New York Rangers and play at the XL Center. The Wolf Pack has been home to some of the Rangers newest faces including Igor Shesterkin, Filip Chytil, and Ryan Lindgren. Follow the Wolf Pack on Facebook, Twitter, Instagram, and TikTok.