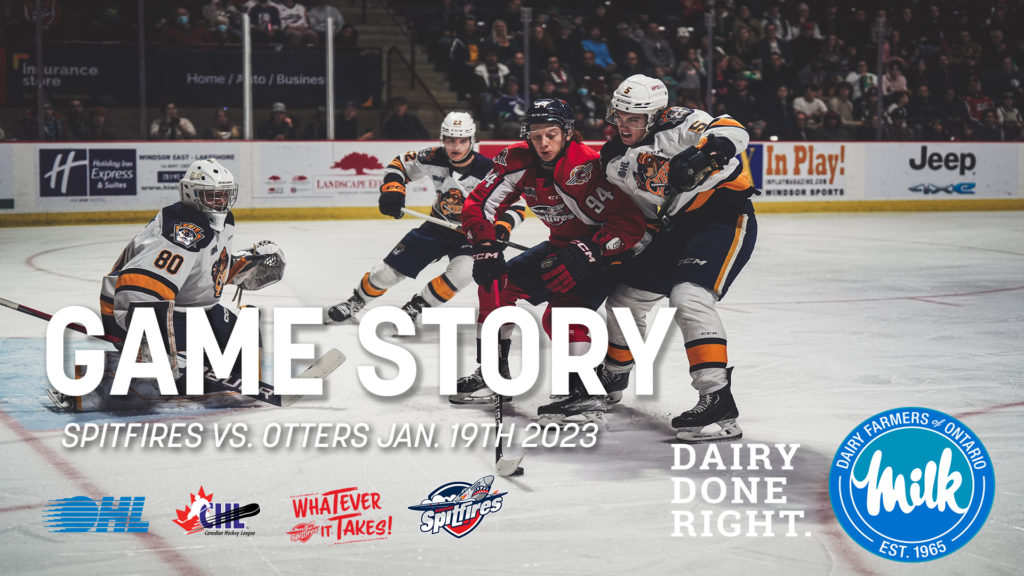 The Spitfires trailed the game for the first half before a 4 unanswered goal swing for turned into a big win on home ice Thursday evening.

In the first period, it was the Otters who scored the games first goal. A turnover in the Spitfires zone had them hemmed in and Erie scored from the top of the circle. It was Alfano’s 10th on the season. The Spitfires would respond just over a minute later. Newcomer, Rodwin Dionicio got the puck in the slot and went through the legs for a beautiful goal to tie the game at 1. It was Rodwin’s 6th og the season and Maillet and Harrison had assists on the goal. Just 4 minutes later, another costly turnover ended up in the Spitfires net and the Otters were up 2-1 at the break. The Spitfires led 9-7 in shots.

In the second period, the Spitfires had some offensive zone time and were able to capitalize. Spitfires captain got the puck at the top of the circle and ripped his 31st of the season. Halfway through the period, another Spitfire turnover turned into a goal for Erie, this one shorthanded for a 3-2 lead. Just three minutes later, the Spitfires would respond. A quick pass from Dionicio to Maggio in the defensive zone was tipped to Greentree in center ice. He skated wide and Maillet drove the net and received the pass going forehand- backhand for the sweet tying goal. Six minutes later the Spitfires created more offence off the rush. Maggio skated with the puck quickly u the center of the ice before dropping it off to Greentree and he walked into the slot and ripped his 14 goal of the season off the post and in for a 4-3 Spitfire lead. The Spitfires led 26-15 in shots after 40 minutes.

In the third period, the Spitfires offence was back at it. Maillet scored his 14th of the season and 2nd on the night shorthanded to give the Spitfires a 5-3 lead. Six minutes later, Maggio would force a turnover off of Downey out of his net and the puck would bounce in front to Shane Wright for the partially empty net goal for his 5th on the season and a 6-3 Spitfires lead. The Spitfires would hold on to the 6-3 win and pick up another two points in the standings.

The Spitfires are back in action on Saturday as they head east to Barrie for a 7:05pm puck drop. And then following that up on Sunday vs the Generals in Oshawa at 6:05pm.