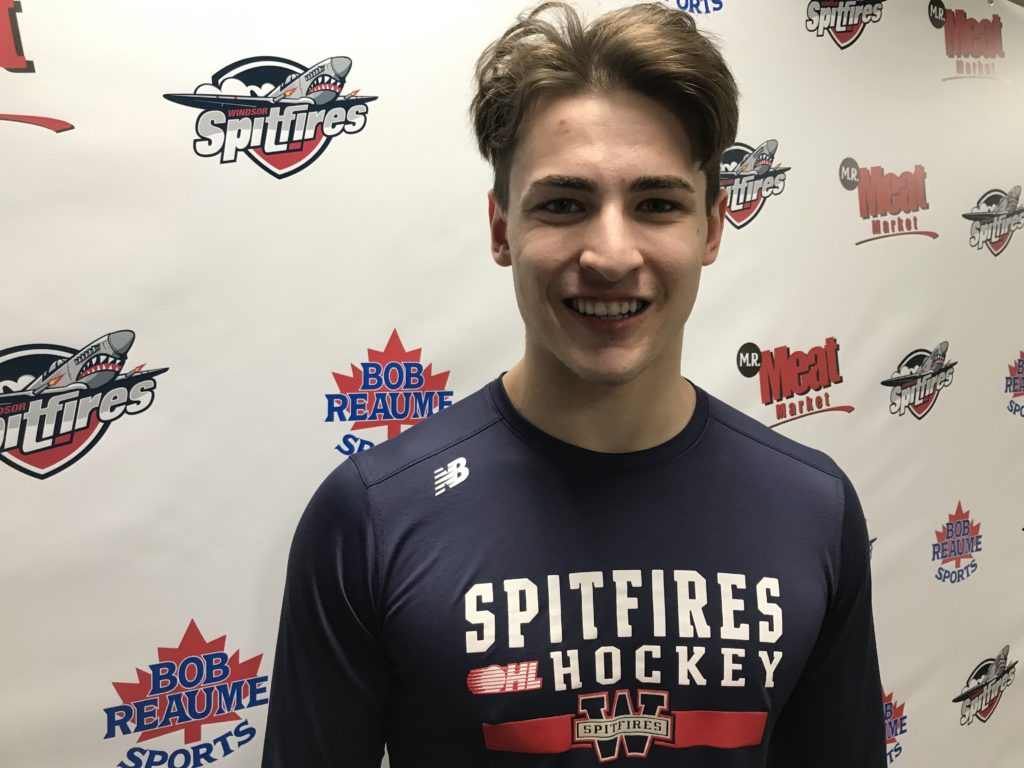 (Windsor, ON) – Newest Spitfire Colton Incze, acquired on Tuesday from the Niagara IceDogs, had the unenviable task of walking into the Spitfire locker room yesterday just before Mikey DiPietro was saying a heartfelt goodbye to his friends and teammates. But the kid handled himself well. He says he’s not here to try and be ‘the next Mikey’, but he says he’s ready to get work, compete for starts and do what it takes to help the club get wins. That’s good enough for us.

WS.COM:  Tell our fans a little about your background and how it is your arrive with us here today.

CI: I grew up in Oakville and played most of my minor hockey there. I actual played Novice Single A way back with Cole Purboo, so it’s cool to be back with him after all these years. I eventually played in the GTHL and was a 5th round pick of the IceDogs. In my 16-year-old year there, my workload was pretty light. I learned a lot from guys like Brendan Perlini and Vince Dunn; guys playing in the NHL now. I started seeing more action in the last two seasons there. But, for my development, I felt like I was ready to take on a bigger role somewhere. Not just to be an OHL goalie, but to compete for a starting job.

WS.COM: So you must feel pretty good about getting that opportunity here?

CI: Ya, I am thrilled to be here. I have talked to Warren a bunch and met Trevor and the rest of the coaching staff yesterday. They all seem confident in my abilities. At the same time, I know they are also confident in Kari. I was really impressed with him when he played against us (in Niagara) this season. I think this will be a good situation in which we push each other for starts while supporting each other. I just want to take it day-by-day and game-by-game right now, starting with this week.

WS.COM: What do you perceive to be some of your biggest strengths in goal? What’s your go-to style etc?

CI: I think my strengths are my flexibility and athleticism. I have the ability to make the big save that keeps my team in a game. My style to this point has been aggressive. I try to take away the shot by taking the angle away. I like to play big. These are the things that have allowed me to be successful so far. In talking to (goaltending coach) Perry (Wilson), he’s hoping to take my strong suits and make my game more efficient. Hopefully, I can soak up as much as I can with him.

WS.COM: It seems these days that guys on every team know guys on all the other teams. That the case with you?

CI: I know Curtis Douglas, with us both being from Oakville. I watched him play a lot when he was with the Mississauga Rebels. We’ve trained together at a gym in Oakville. I know Boka just from being in the the league. Watching him play mostly. He’s a heart and soul guy that I have a lot of respect for. I don’t know a lot of the guys yet, but they have all been very friendly and welcoming.

WS.COM: No one would ever expect you to come in and ‘take over’ for Mikey. But you, for better or worse, are kind of linked to him know that he’s gone and you are the next goalie in. How do you look at that whole thing. Expectations and the sort?

CI: Mikey is a ’99 born goalie, just like me. Growing up, I tried to push myself to outplay him. I have a lot of respect for him. It’s amazing to see what he accomplished.here in Windsor. But, no way. I’m not coming in trying to be him. I’m trying to be me. A better me. I am confident in myself. I have personal goals and I think the team, we’re in sixth now. I think it depends on what teams do at the deadline. But I think we can climb up to fourth place by season’s end. Our young guys are getting more and more confident. I think in the second half of the season, we’re growing to start to blossom. Then next year, there’s no reason why we can’t compete for a league title. All of our core players are returning next year. All of this is motivating me right now to show what I can do this season.