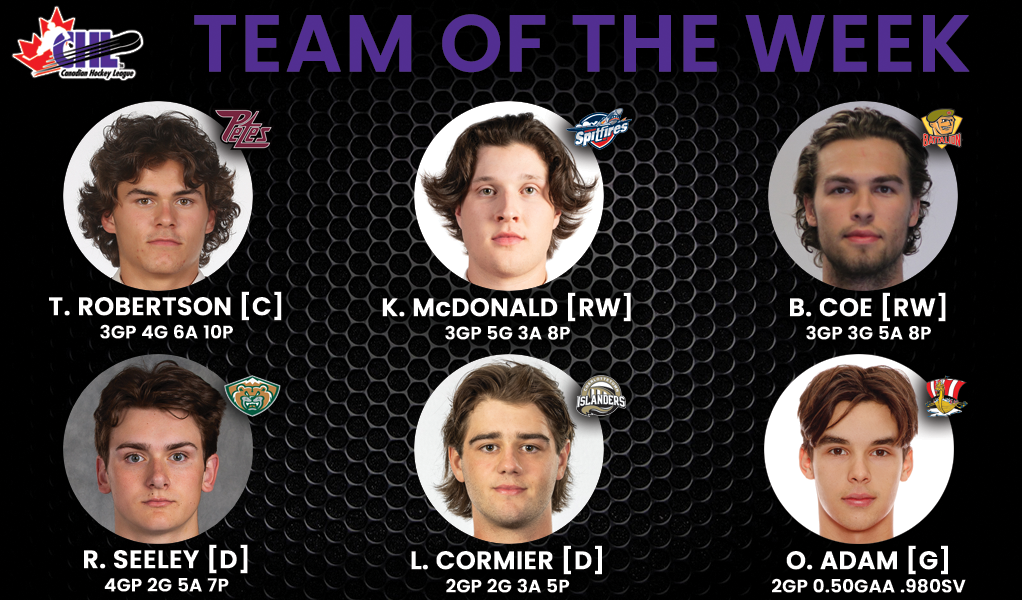 The Canadian Hockey League announced today the seventh edition of the CHL Team of the Week for the 2021-22 regular season based on individual performances from November 15-21.

Also up front is Windsor Spitfires veteran right-wing Kyle McDonald whose week counted five goals and three assists for eight points over a trio of contests including back-to-back three-point efforts coming against Flint. In all, through 16 appearances this season, the Ottawa native has tallied 19 points, good for second in team scoring and matching his previous career high set in 2019-20 that came in 52 games.

Rounding out the forwards is San Jose Sharks prospect Brandon Coe of the North Bay Battalion who registered three goals and five assists for eight points in three appearances. Currently riding an eight-game point streak, that stretch counts Sunday’s three-point effort versus Niagara in which the overage right-wing tallied twice and added an assist en route to a 7-3 victory and first-star honours. In recognition, Coe was later honoured as the OHL Player of the Week. Now with 33 points on the season, the product of Ajax, Ont., trails Robertson by just one point for the OHL lead.

On the blue line, Carolina Hurricanes draftee Ronan Seeley of the Everett Silvertips dominated with seven points counting two goals and five assists coming in four appearances, including a pair of three-point performances in victories over Portland and Spokane to help him later earn recognition as the WHL Player of the Week. A 19-year-old native of Olds, Alta., Seeley currently sits fourth in team scoring with 17 points in 16 games, numbers outpaced by just two fellow rearguards league wide.

Also on the back end is Vegas Golden Knights prospect Lukas Cormier of the Charlottetown Islanders who collected two goals and three assists for five points in two outings, helping him to push his point streak to six games where he has gotten on the scoresheet 11 times. A 19-year-old native of Sainte-Marie-de-Kent, N.B., Cormier has collected 25 points through 20 appearances in 2021-22, an encore performance of a year ago when he led all QMJHL blue-liners with 54 points in 39 games.

Between the pipes, Baie-Comeau Drakkar netminder Olivier Adam was nearly perfect across a pair of appearances, first turning aside 26 of 27 shots in Friday’s 4-1 win over Drummondville before following up that performance two nights later when he stopped all 23 shots in a 5-0 victory against Cape Breton. In all, it marked Adam’s second shutout in his past three appearances and ultimately helped him to earn recognition as the QMJHL Player of the Week. A 19-year-old native of Drummondville, Que., Adam has found the win column four times this season while coming away with a .914 save percentage and 2.60 goals-against average through 13 appearances.