Newly-acquired defenceman Michael MacIntyre scored the winning goal on the powerplay with just four minutes remaining, capping a four-goal comeback and a 5-4 Windsor Spitfires win in their home opener Thursday night at the WFCU.

Zack MacQueen scored a pair of goals early in the third period and Jack Campbell made 27 saves, giving Bob Jones a win in his first game as the team’s head coach.

It was an improbable finish to a game that didn’t look good for the locals through the first 40 minutes.

The Spitfires were sloppy in their own zone for much of the first two periods and landed in penalty trouble, allowing Plymouth’s top line of Alex Aleardi, Tyler Brown and Garrett Meurs to take full advantage.

“We looked like a nervous team early on and it took a good while to settle down,” Spitfires coach Bob Jones told windsorspitfires.com.

Aleardi was in on all four Whalers goals, pacing his club to a 4-1 lead with a hat-trick.

It looked like the game had slipped away from the home side, until a seemingly harmless looking play late in the second that proved key as the night wore on. Looking to set up linemate Zack MacQueen, Alex Khokhlachev centered a pass that somehow found its way through a maze of bodies and past Whalers goalie Matt Mahalak to cut the lead to 4-2.

Fittingly, it was MacQueen that came up big for the Spits in the third period. Showing great patience on the powerplay, he held the puck long enough to collapse the Whalers’ defense and banked in his first of the season to cut the lead to 4-3. MacQueen electrified the crowd just under 3 minutes later, stealing a puck in the Plymouth zone and zipping a wrist shot over Mahalak’s shoulder to tie the game at 4-4.

From there, some late mental lapses did the Whalers in. Defenceman Tom Wilson took a silly checking from behind penalty at the 14:18 mark. Then, shortly after, Aleardi undid some of his good work on the night with a slashing call to put the Whalers down two men. That opened the door for MacIntyre – who took a one-time pass from Steven Trojanovic and fired a low blast from the point past Mahalak for the winner and his second goal of the night.

“We really started to get our confidence in the third. We’ve got some work to do. But it’s great that our guys started to get going and built some confidence,” Jones said following his first ever win as Spitfires head coach.

The Whalers outshot the Spitfires 31-22, including 14-7 in the second period … 6,207 fans filled the WFCU Center on a night when the 2009-2010 team was honoured for its Memorial Cup championship. The ceremony featured former Spitfire greats Marcel Pronovost and Bill Bowler … The Spits don’t have much time to rest on their opening night win as they travel to Sarnia for a battle with the Sting on Friday night. The team will get a big boost as forward Kenny Ryan will be back from Toronto Maple Leafs training camp and in the starting lineup. 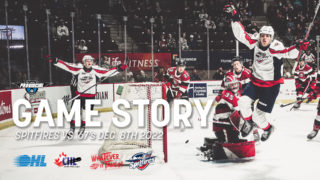 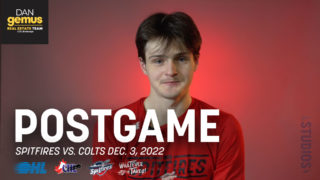 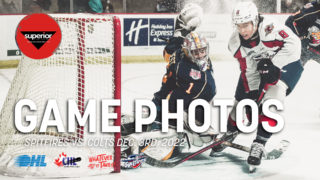 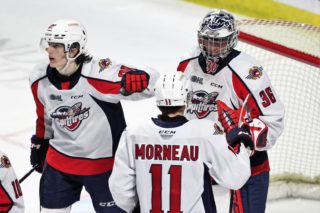 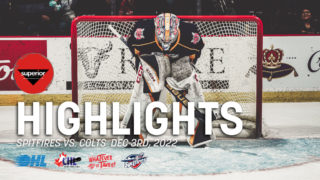 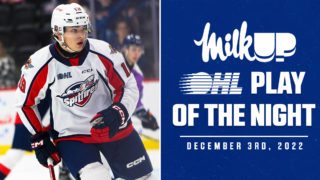 OHL Play of the Night Presented by MilkUP: Miedema's Miraculous Moves!
5 days ago