BELL RETURNS AS VOICE OF THE SPITFIRES 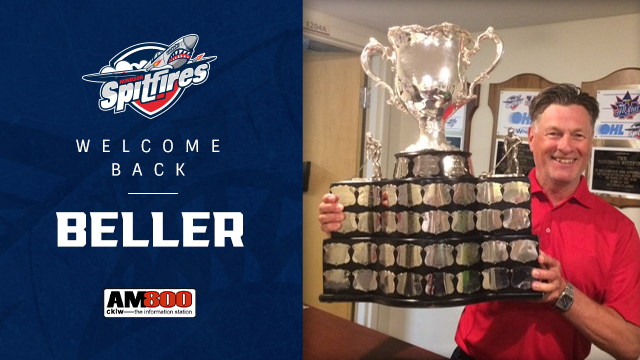 (Windsor, ON) – Veteran broadcaster Steve Bell is returning as the “Voice of the Spitfires”, handling play-by-play duties on the club’s flagship station, AM800 CKLW.

He takes over for Mike Miller, who assumed the role for more than 10 seasons back in 2008. Miller was forced to retire late last season due to lingering vocal cord issues.

Bell originally began calling Spitfire games during the 1987-88 season. He’s been covering the team since and has more than 17 years experience doing play-by-play.

A well-know media figure in Windsor-Essex, Bell, who recently began his 40th year of broadcasting at AM800, says he’s excited for what’s ahead.

“I don’t take it lightly. It’s an honour,” Bell said. “You take a look around the Ontario Hockey League, there’s only 20 of these positions. It’s a lot of fun and I take it seriously. If you would have told me when I was a kid that I would have a chance to spend this much time going to hockey games as part of my living, I would have jumped at it.”

“I’m very comfortable working with Frank,” Bell added. “He’s a laid back guy, but he comes prepared. Doing colour is a tough job. But, as a former player, Frank offers unique insights. I’m looking forward to having him in the booth this season.”

Rounding out the broadcast team is Manny Paiva, who returns as pregame co-host.