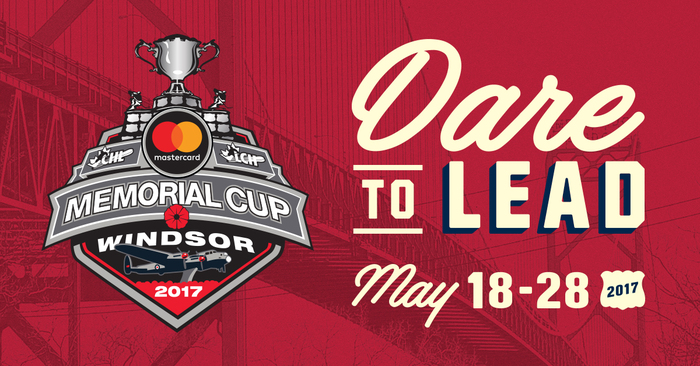 The Canadian Hockey League in association with the Windsor Spitfires and the Host Organizing Committee for the 2017 Mastercard Memorial Cup are proud to unveil the official logo for next year’s championship.

“We’re very proud to present this logo to the people of Windsor & Essex County,” said Host Organizing Committee Chair John Savage. “It’s an enduring symbol of our region, one that we are excited to share with the entire community.”

The 2017 Mastercard Memorial Cup logo is inspired by the Lancaster Bomber, regarded as the most famous and most successful of the Second World War night bombers. The City of Windsor has proudly displayed a Lancaster Bomber on a pedestal in Jackson Park as a memorial to those who served and died during World War II.

“As mayor of the City of Windsor, I am committed to ensuring we deliver an unforgettable Mastercard Memorial Cup in 2017,” said Windsor Mayor Drew Dilkens. “An event logo puts a face on an experience and I am proud to see a Lancaster Bomber, a powerful aircraft with a storied history, chosen to represent the Windsor Spitfires and our incredible City.”

The logo continues to feature the traditional likeness of the Memorial Cup trophy atop logos for the CHL, and a rebranded Mastercard, entering their 19th straight year as title sponsor of the event. The poppy also remains a fixture of the logo positioned at the centre and symbolic of the event’s longstanding support of Canadian Armed Forces.

As the first of many community outreach initiatives by the 2017 Mastercard Memorial Cup Host Organizing Committee, thousands of minor hockey players in Windsor will wear the logo patch this season.

The 99th edition of the Mastercard Memorial Cup will take place May 18-28, 2017, featuring the host Spitfires along with the champions of the Ontario Hockey League, the Western Hockey League, and the Quebec Major Junior Hockey League.

The prestigious national championship returns to the city of Windsor for the first time since 1981, an event that featured three teams including the champion Cornwall Royals (QMJHL), the Kitchener Rangers (OHL), and the Victoria Cougars (WHL).

The Spitfires are listed in Mastercard Memorial Cup record books as one of just eight teams to win back-to-back titles at the 2009 event in Rimouski, QC, and Brandon, MB, in 2010.

Taylor Hall was named MVP at both events and is the only two-time recipient of the Stafford Smythe Memorial Trophy in tournament history.