MENU
Get the latest 75th Anniversary Gear at Spitsgear.com
October 12, 2021 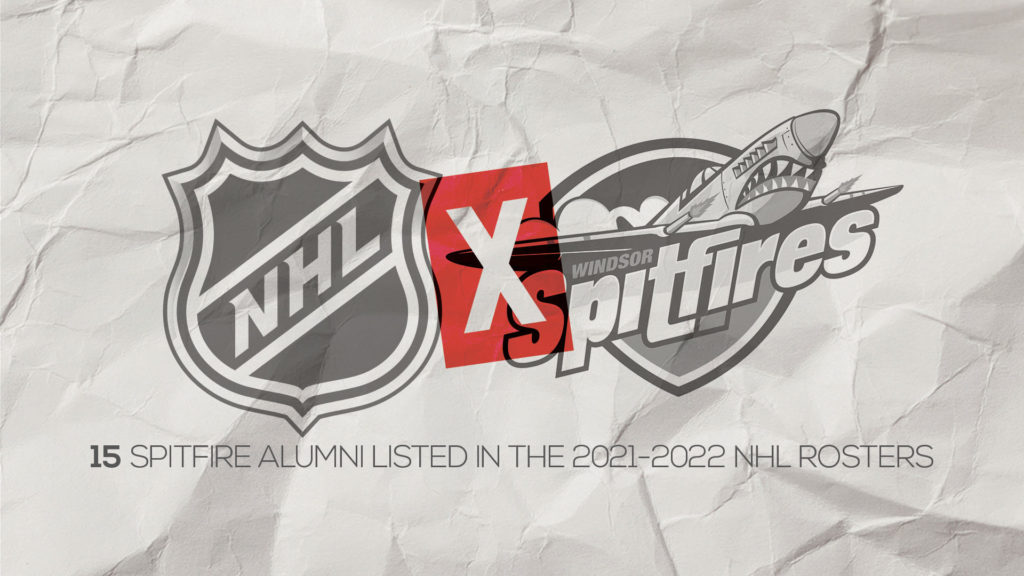 The Windsor Spitfires are proud to announce that 15 former players have made 2021-2022 NHL Opening Night Rosters.

Cam Fowler – Fowler was drafted 17th overall by the Spitfires in the 2008 OHL Priority Selection. Fowler played one memorable season for the Spitfires in 2009-2010, recording 55 points in 55 games. The team went on to win an OHL championship that year. Fowler went on to win a memorable cup with the team that season and had 6 points in 4 games. Fowler was drafted 12th overall in the 2010 NHL Entry draft.

Christian Fischer – Fischer was drafted 203 overall by the Spitfires in the 2013 OHL Priority Selection. He then went on to play to seasons with the USA National Development Program before being drafted by the Arizona Coyotes 32nd overall in the 2015 NHL Draft. He signed with Arizona on August 20th 2015 and then joined the Spitfires. Fischer only played one season with the Spitfires from 2015-2016. During that season Fischer appeared in 66 games and scored 90 points.  Fischer appeared in a few AHL games before jumping up to the NHL full-time in 2017-2018.

Taylor Hall – The Calgary Alberta native was drafted by the Spitfires 2nd overall in the 2007 OHL Priority Selection. Hall was instrumental to the Spitfires success. During his rookie season he tallied 84 points in 63 games and went on to win CHL Rookie of the Year. He had an OHL best plus/minus +40, OHL most goals by a rookie (45), 2 OHL player of the week awards and OHL rookie of the year honours. In Hall’s second season the scoring continued, he scored 90 points in 63 games during the 2008-09 season. The Spitfires went on to win the OHL championship that year and during that playoff run Hall had the OHL’s most playoff goals with 16 and the OHL most playoff points with 36. Hall went on to win the OHL Playoff MVP. Since the Spitfires won the OHL championship they were rewarded with a chance to win the Memorial Cup. And the Spitfires did just that. Hall and Co. won the 2009 Memorial Cup and Hall won the CHL Mem Cup MVP. In Hall’s last season (2009-2010) he scored 106 points in 57 games on route to a 2nd OHL Championship and a 2nd Memorial Cup. Hall won the Ed Chynoweth award for most points in the Mem Cup, Mem Cup MVP, OHL’s most assists (66), and the Eddie Powers Memorial Trophy for the most points in the OHL. After three successful seasons with the Spitfires, Hall was drafted 1st overall to the Edmonton Oilers.

Zack Kassian – Kassian a Windsor Ontario native was drafted by the Peterborough Petes 4th overall in the 2004 OHL Priority Selection Draft. After 63 points in 61 games Kassian was drafted in the 2009 NHL Entry Draft 13th overall to the Buffalo Sabres. Kassian played one and a half seasons with the Petes before being traded to his hometown Spitfires. Kassian appeared in five games in the regular season for the Spitfires during the 2009-10 season. He then played in 19 in the playoffs and recorded 16 points. He won his first and only OHL championship. After winning the OHL championship, Kassian and the Spitfires won the Memorial Cup.

Gabriel Vilardi – The Kingston Ontario native was drafted 2nd overall by the Spitfires in the 2015 OHL PS. In Vilardi’s rookie season (2015-16) he tallied 38 points in 62 games. In his second season he almost doubled his scoring by recording 61 points in 49 games. The Spitfires were the host of the 2017 Memorial Cup, and Vilardi and the team won the cup in front of the home crowd. Vilardi was then drafted to the LA Kings 11th overall in the 2017 NHL Entry Draft. During the offseason, Vilardi was traded to his hometown team the Kingston Frontenacs for the 2017-2018 season.

Josh Bailey – the Bowmanville Ontario native was drafted 19th overall to the Owen Sound Attack in the 2005 OHL PS. Bailey played for the Attack for one and a half seasons before being traded to the Spitfires. During the 2006-07 season Bailey played 27 games for the Attack and 42 for the Spitfires recording 26 and 35 respectively. During the 2007-08 season Bailey broke out and scored 96 points in 67 games for the Spitfires. The team went on to lose in the first round of the playoffs but Bailey recorded 6 points. Bailey was then drafted to the NHL 9th overall to the New York Islanders and joined the team right away.

Mikhail Sergachev – The Nizhnekamsk Russia native was drafted by the Spitfires in the 2015 CHL Import Draft 6th overall. Sergachev played in 67 games in his rookie season and recorded 57 points. Sergachev was awarded quite a few accolades in his first season, he was invited to the CHL top prospects game, he won OHL First All-Rookie Team, OHL First All-Star team, OHL’s most goals by a defenseman (17) and the OHL’s most outstanding defenseman. After the first successful season, the Montreal Canadiens made Sergachev the 9th overall pick in the 2016 NHL Entry Draft. Sergachev played in four games for the Canadiens before being released back to the Spitfires. In his 2nd and final OHL season, Sergachev played in 50 games and scored 43 points. The Spitfires lost in the playoffs but were the host of the CHL Memorial Cup. And as you know the Spitfires won on home ice in 2017 making Sergachev a Memorial Cup Champion. Sergachev also won CHL Mem Cup All-Star Team honours and OHL Second Team All-Star.

Jack Campbell – Is a native of Port Huron, Michigan and was drafted by the Spitfires in the 2008 OHL PS 108th overall. Campbell then played for the US National Development Program and U17U18 US Team’s for the 2008 and 2009 season. In 2010, Campbell was drafted by the Dallas Stars 11th overall in the NHL Entry Draft. Campbell played his first season for the Spitfires during the 2010-11 season and played in 45 games going 24-14-4. During Campbell’s 2nd season he played for the Spitfires for 12 games before being traded to the Soo Greyhounds.

Jason Spezza – Is a native of Mississauga Ontario and was drafted 1st overall in the 1999 OHL PS by the Mississauga Icedogs. Spezza played for the Icedogs in the 1999-00 season recording 62 points in 52 games. The next season 2000-01 Spezza played in 15 games recording 30 points for the Icedogs and was then traded to the Spitfires. Spezza played in 41 games and scored 86 points that season. Spezza was then drafted 2nd overall by the Ottawa Senators in the NHL Entry Draft. Speza returned to the Spitfires for the 2001-02 season and played in 27 games before being traded to the Belleville Bulls.

Connor Corcoran – Corcoran is a native of Beeton, Ontario was drafted by the Spitfires I the 2016 OHL PS 21st overall. Corcoran played four season for the Spitfires from 2016-20. A strong defenseman, Corcoran improved his point totals ever season while playing strong on the blueline. He had 10 points in his rookie season, 24 in his 2nd season, 32 in his third and 54 in his 4th. After Corcoran’s 2nd season he was drafted to the NHL’s newest franchise the Vegas Golden Knights in the 2018 NHL Entry Draft 154th overall. Currently, Corcoran is on the injury/non-roster list for the Golden Knights. 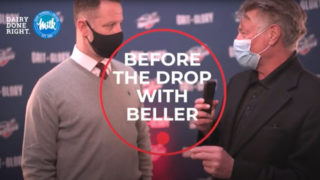 Before The Drop with Steve Bell - Presented by Dairy Farmers of Ontario.
31 mins ago